Tonight Full Empire Promotions added a video greeting from Nestor & Shannon inviting fans to come visit them May 21 – 23 at Pensacon in Pensacola, Florida. Shannon will be signing copies of her book All Is Not Lost which can be purchased via their website. If unable to attend the event you can also purchase virtual meet & greets.

Last night Shannon sat down for an in-depth discussion of her best selling book: All Is Not Lost for Chevalier’s Books with none other than her husband, Nestor Carbonell! During the hour long interview they discussed the sacrifices she made when she came to the United States at 18 to study acting. Also the feelings she went through as she coped with giving up her dream of acting in exchange for taking care of her family full time. The most moving part of the interview however was when Shannon read the beginning of the book & Nestor said it made him want to cry. In conjunction with the interview she also did a book signing, you can purchase a signed copy below – Nestor posted on his Official Instagram that he will sign the books as well if fans are interested.
Please Note: Chevaliers Books only ships within the US.

On 3/15 Shannon & Nestor joined Studio 10 to discuss her new book, All Is Not Lost as well as their love story.

Social Media
Nestor & Shannon promote All Is Not Lost
January 28th, 2021   by Renee 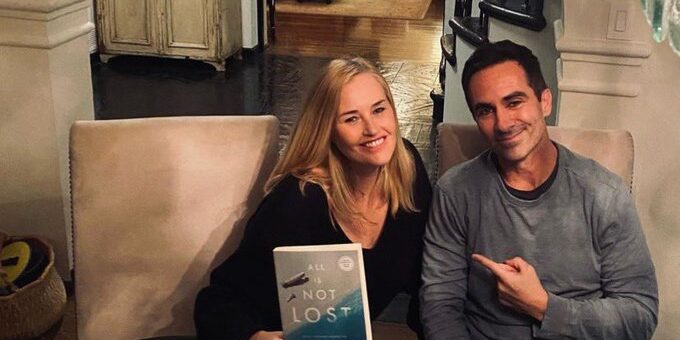 On January 16th Nestor announced via his social media that his wife, Shannon is releasing her book: All Is Not Lost:
How I Friended Failure on the Island and Found a Way Home
. In the past 2 weeks, he & Shannon both have begun promoting the book’s upcoming release through social media as well as her website which can be viewed below. The official synopsis for the book from the site is as follows:

“All Is Not LOST is the story of what happened when one woman set aside a lifelong dream in favor of her kids, only to find herself battling her own ego and unfulfilled ambition. Shannon Kenny Carbonell—wife of actor Nestor Carbonell of LOST, Bates Motel, and The Morning Show fame—knew she was making the better choice for her, no matter how painful, when she decided on full-time motherhood over career. Little did Shannon know she would soon find herself desperate to feed the part of her that was suddenly starved of creativity and accomplishment.

When she found out her family would be relocating to Oahu, Hawaii, while Nestor shot LOST, Shannon helped uproot their lives with as much true love and support as she could muster, thinking, “I’ll just have to be lost in the midst of LOST.” But not long after the move, a torturous family fight revealed the burden of her loss was also weighing upon those closest to her. Just like the LOST survivors, she had crashed on an island that would test her, heal her, and surround her with the people who would eventually show her the way home.

With a no-holds-barred honesty that is raw, sometimes heartbreaking, and often hysterical, former working actress Shannon Kenny Carbonell tells her tale of attempting to reconcile her growing feelings of failure and sudden loss of her identity. This is her journey.”

The book has already received praise for its honest look at giving up your dreams for your family & life in the entertainment industry. With a release date of March 16th, you can pre-order the book through Shannon’s site below through links to Amazon, Books-A-Million & more.

Dominic from Full Empire Promotions posted a video on the company’s social media for the end of the year, with the talent sending their warm wishes to their fans. Néstor was among the well wishers which included such talents as X-Files alums: Mitche Pileggi, Annabeth Gish, and Nicholas Lea. You can view Néstor’s little segment as well as the video in its entirety below.

Néstor announced below via his Twitter while replying to a fan that he will be participating in a Virtual Lost Reunion in January during Galaxy Con. He did not specify a date, nor is the information up on the convention website however it is great news to hear that he will be involved with this. He also stated he would keep fans up-to-date on any additional Conventions he may attend including Pensa Con which he has already been announced to attend in February.

Hi Miki, I hope this finds you well. I’ll be participating in a virtual Lost reunión in January (Galaxycon). I’ll definitely post something if and when I’m able to make it to the Florida con or any others. Thank you so much for reaching out. Stay safe and hope to see u soon:)