Welcome to Néstor Carbonell Central your fan source for actor, Néstor Carbonell. You may remember him from his role as Luis Rivera in Suddenly Susan, as the ageless & enigmatic Richard Alpert in Lost, or as stoic Sheriff, Alex Romero in Bates Motel. Other roles include the Dark Knight Trilogy, as well as numerous voice acting credits. In addition to acting he has stepped behind the camera to direct, produce, and screen write. Néstor currently co-stars in The Morning Show as Yanko Flores.

On February 17th, Nestor along with other cast memebers of Lost reunited for Galaxy Con Live, for a panel & to meet with fans. Today the following clip was uploaded to Galaxy Con’s You Tube channel of Nestor explaining the ending to the show which to this day is still a topic of debate for fans.

Convention
Galaxy Con One on One Chat with Nestor
January 18th, 2021   by Renee

Galaxy Con hosted a free live stream Q & A with the cast of Lost which was a reunion with Nestor, Emilie DeRavin, Andrew Divoff, Francois Chau, and Jeremy Davies. During the stream they discussed how they got their roles, as well as answered a few questions from fans.

Afterwards, myself and other fans had the chance to chat with the actors individually, I of course had the pleasure of chatting with Nestor. It was a bit of a wait because he truly was taking his time with each fan in order to get the chance to really talk with them, but the wait was certainly worth it! I was able to talk with him for almost 20 minutes and in that time our conversation ran the gamut from my time in the Marine Corps to my children, and how I met my husband. I also asked him about if he had visited here and he stated he hadn’t but that it was awesome and he wanted to check it out. You can check out the full chat video below! 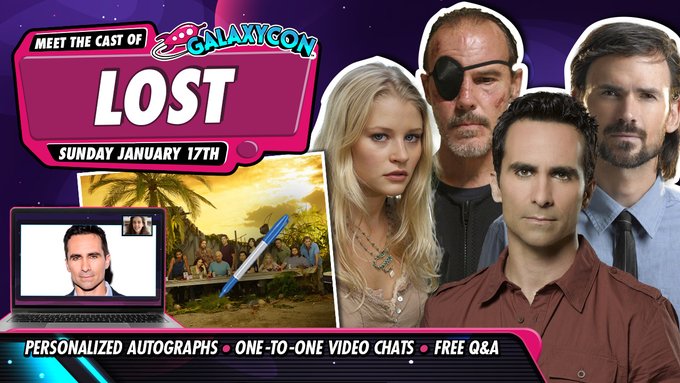 It was announced today by Galaxy Con Live that Néstor will be joining other cast members from Lost for a free live stream Q & A on January 17th, 2021. In addition to this, he will be signing autographs and doing video chats with fans. More information including prices can be found below.

Full Empire Promotions announced their 2021 Convention Schedule this morning via their site/social media. Néstor was announced to attend the 2021 PensaCon, while he had previously been announced for this event it is great to see that he will still be appearing (Note this is subject to change depending on scheduling as well as the ongoing global COVID-19 Pandemic)!
You can get more information on Ticketing & more at the Pensacon website below.

Néstor announced below via his Twitter while replying to a fan that he will be participating in a Virtual Lost Reunion in January during Galaxy Con. He did not specify a date, nor is the information up on the convention website however it is great news to hear that he will be involved with this. He also stated he would keep fans up-to-date on any additional Conventions he may attend including Pensa Con which he has already been announced to attend in February.

Hi Miki, I hope this finds you well. I’ll be participating in a virtual Lost reunión in January (Galaxycon). I’ll definitely post something if and when I’m able to make it to the Florida con or any others. Thank you so much for reaching out. Stay safe and hope to see u soon:)