Welcome to Néstor Carbonell Central the official fansite for actor: Néstor Carbonell. You may remember him from his role as Luis Rivera in Suddenly Susan, as the ageless & enigmatic Richard Alpert in Lost, or as stoic Sheriff, Alex Romero in Bates Motel. Other roles include the Dark Knight Trilogy, as well as numerous voice acting credits. In addition to acting he has stepped behind the camera to direct, produce, and screen write. Néstor currently co-stars in The Morning Show as Yanko Flores.

For this month’s site update the gallery we are completing the site’s sections on Nestor Carbonell’s 3 season run as Richard Alpert on ABC’s Lost. In the gallery itself you can view Behind the Scenes images from 5th & 6th Season as well as episode stills from various episodes. Visit the Video Vault for interviews that Nestor gave where he discusses the mysterious Richard which focused greatly on the Season 6 Richard centric Ab Aeterno. Lastly the press library has been updated with written interviews from 2009 to 2010 about his time on Lost.

June 2006 saw the return of both Nestor Carbonell & Strong Medicine to our screens as he reprised his role of businessman, Jonas Rey. For the sixth and final season, his role was expanded to a main cast member however he did not appear in every episode. The 9th episode saw Jonas & Lu tie the knot in a Church ceremony which was filmed at Nestor’s Church that he attends. While the series finale which aired on February 5, 2006, ended on a happy note with the birth of their daughter. The gallery has been updated with screencaps as well as promotional images and newspaper interviews that Nestor gave.

In 2004 Nestor Carbonell joined the Lifetime hit show, Strong Medicine with the recurring role of a wealthy businessman – Jonas Rey. He tells a family member who is a patient at the hospital he will marry Dr. Lu Delgado (Rosa Blasi) who he sees around the hospital helping patients. After pursuing her they finally begin dating and by the end of the season, he proposes to her. The gallery has been updated with screen captures from Nestor’s Season 5 episodes as well as promotional images. Screencaptures & more for Season 6 will be posted next month so be sure to visit!

February 27th, Nestor Carbonell & wife Shannon Kenny Carbonell were a power couple as they walked the silver carpet of the 28th Annual SAG Awards! Nestor was in attendance as an ensemble nominee for best drama for his role as Yanko Flores in The Morning Show. Check out photos and red carpet interviews with Nestor & Shannon below!

In September of 2011, the thriller crime drama television series Ringer premiered on The CW which co-starred Nestor Carbonell as FBI Agent Victor Machado. His role was as protector of Bridget (portrayed by Sarah) who was posing as her twin sister, Siobhan. Victor’s backstory is explored in episode 16 where we learn he had a relationship with one of his informants. The series ran for 22 episodes of which Nestor appeared in 17, but was unfortunately canceled due to low ratings. The gallery has been updated with screen captures of all episodes that Nestor appeared in. In addition Behind the Scenes of him filming as well as Promotional Ads can also be found in the gallery section. Rounding out the update you will find various Episode promos/interviews in the video vault and articles in the press library.

Article 2: From “Lost” to “Ringer”, Nestor Carbonell Is All About Mysterious TV Dramas

Article 3: From Harvard to Hollywood and Everywhere In Between: 10 Questions with Ringer Star Nestor Carbonell

In 2014, Nestor Carbonell filmed the movie Medicine Men (also known as Mosquito) portraying the role of a townsperson, Silas St. John. Since filming very little has come out on the movie and it has yet to be released however according to director Guy Malim’s website it is set to be released this year. The gallery has been updated with behind-the-scenes images taken by unit production manager, Herman Wilkins as well as movie posters designed by Ersin Karabulut. You can view the teaser trailer that was uploaded by the director in our video vault below as well!

Synopsis from the official website:
MEDICINE MEN is an enthralling tale of rival doctors in a quarantined town.

Wishing everyone a Happy New Year! For the first site update of 2022, I wanted to focus on Nestor’s various television guest appearances over the years. We start with his 1992 appearance in A Different World & end in 2015 with his role as Sheldon Blackwood in Showtime’s Ray Donovan.

Today we celebrate not only Nestor’s birthday but we have come to the 1 year anniversary of this site! When I started this site a year ago, I was not sure where it would go. This past year has been an amazing ride filled with ups & downs, certainly never a dull moment in the Nestor fandom! For the anniversary we have an amazing new theme that was designed by Kaci Elizabeth. I originally thought about doing a theme based on Nestor’s overall career but instead went with focusing on one character, and of course I had to go with my favorite – Sheriff Alex Romero from Bates Motel! The theme went through 2 different previews before settling on this look which we both felt captured the old school feel that Bates gave off. The GIF set in the header was Kaci’s idea which she really wanted to incorporate while I wanted to add Nestor’s autograph into the header in some fashion. In addition to the new theme I have also updated the gallery with public appearances that Nestor has made over the years from Film Premieres, Series premieres, Award Events to that time he threw one of the first pitches at an LA Dodgers game even. You can check out all of the events below in our gallery and here is to one year with this site, and can’t wait to see what the 2nd year brings with all of his new upcoming projects! 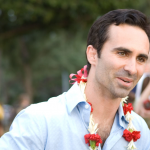 Tonight was the season finale of The Morning Show and what a way to bring Yanko’s storyline full circle! In the end due to his suspension Yanko stood alone at UBA to deliver the news since he was the only one not exposed to COVID.
Thank You to Nestor Carbonell & the rest of the cast & crew of The Morning Show – onward and upward to another season!

Tonight’s episode which was released early saw the return of Yanko on our screens due to his suspension & being absent the past 2 episodes. It also saw Yanko & Claire reunited since we last saw them together in the Season 1 finale. What started out to be a sweet reunion with them making plans to get together again before she left goes south. She becomes upset at the realization that Yanko is going to attend Mitch’s memorial service. He begs her to understand why he is going which spurs her to reveal that she is financing the lawsuit against UBA for Hannah. Yanko wants Claire to understand she can’t blame herself for Hannah’s death which only angers Claire more causing her to storm off. It was great to see Nestor Carbonell & Bel Powley back together on screen although it seems that all hope may be lost for a possible reconciliation of their relationship. In the Inside the Episode, Nestor discusses Yanko’s motivation for attending Mitch’s memorial and can be found below in the video vault.

International non-profit fostering a bias-free world for children with disabilities through the creation of inclusive playgrounds and educational programs.

Honor and empower Wounded Warriors who incurred a physical or mental injury, illnesses, or wound, co-incident to military service on or after September 11, 2001.
Fansite Affiliates